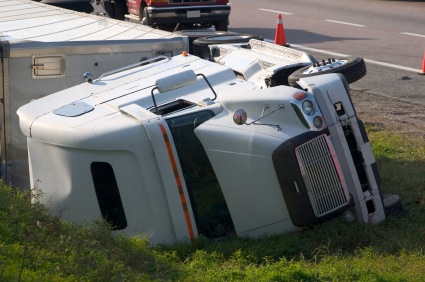 In reviewing a trucking case, Mr. Malm and his firm will look carefully at:

Truck accident lawyer, John J. Malm, has been retained by a West Chicago woman after she suffered a traumatic brain injury in a collision with a stalled semi-trailer on St. Charles Road in Wayne Township, Illinois. An investigation surrounding the accident shows that the driver of the truck failed to place required warnings, placards, or signs on the roadway to warn passing motorists of the stalled rig that blocked both lanes of the highway. The driver of the truck had been awaiting a tow after he made an improper left turn from a private driveway, carelessly dropping the rear axle of his rig into a ditch. The lawsuit filed on behalf of the woman alleges that the driver of the truck also failed to take steps to warn approaching motorists of the hazard in the roadway in violation of Section 392.22 of the Federal Motor Carrier Safety Regulations, which requires that a commercial motor vehicle stopped upon the traveled portion of a highway place at least three bi-directional emergency reflective triangles, or at least three liquid burning flares, on the traffic side of the stalled trailer to warn approaching motorists of a stopped rig on the highway.

$735,755. Wrongful Death, Trucking Accident. Settlement reached after arbitration and before trial on behalf of the family of an Illinois semi-truck driver who was killed in a roll-over collision on I-94. The wrongful death lawsuit, brought against the operators of two Department of Transportation trucks, alleged that the drivers of the two trucks made a sudden, improper maneuver onto the highway, forcing the driver of an approaching semi-truck to take sudden evasive maneuvers that caused the rig to roll over, onto the highway. A State Police investigation showed that the two Department of Transportation vehicles had entered the roadway illegally after driving along the shoulder and then across an on-ramp in an attempt to merge in front of approaching traffic on the highway.

$195,000. Cook County, Illinois. Trucking Accident, Jack-Knifed Semi, Lumbar Disc Injury. Settlement obtained in a trucking accident lawsuit brought on behalf of a Naperville woman who suffered a lumbar disc herniation. The accident occurred in the northbound lanes of I-55 in Chicago, Illinois after a semi-tractor trailer made an improper sudden braking maneuver and jack-knifed, puncturing its fuel tank and spilling slick diesel fuel onto the icy pavement. The woman’s SUV, which approached the accident scene and traveled over the area of the spilled fuel, lost control and struck an embankment, injuring the woman. Evidence obtained by trucking accident lawyer, John Malm, showed that the trucking company failed to adequately train its driver to operate the tractor-trailer safely and to avoid skidding and loss of control when operating a rig on icy roads. Additionally, the driver of the truck failed to take steps to warn approaching motorist of the hazard posed by the leaking fuel.

$1,520,000. Will County, Illinois. Wrongful Death, Trucking Accident. A settlement totaling $1,520,000 was reached on behalf of a family of a young girl who died as a result of brain injuries she suffered in an intersection accident with a heavy propane truck in rural Will County. Evidence obtained by trucking accident lawyer, John Malm, showed that the driver of the propane truck failed to keep a proper lookout as he operated his truck on a two-lane road, driving through an uncontrolled intersection and striking the small pickup truck in which the girl was a passenger. Human factors research shows that drivers who must react to a change in a condition that is contrary to their expectations usually take longer to perceive, react, and take evasive actions. A scene investigation proved that the operator of the propane truck failed to apply brakes or take any evasive action to prevent the intersection accident, because he was not looking for appropriate visual cues at the intersection.

$100,000 (policy limits). Will County, Illinois. Trucking Accident, Uninsured Motorist Claim. Settlement in the amount of $100,000 was reached on behalf of an Aurora man who suffered shoulder injuries, including a broken clavicle, after the vehicle he was operating was struck by a semi-truck on an icy road in northern Will County. The semi-truck then fled the scene of the accident before police arrived. Because the man was unable to identify the truck or its driver, an uninsured motorist claim (a UM claim) was brought against the man’s own automobile insurance policy, and a settlement was reached for the limits of coverage before arbitration. In Illinois, a UM claim may be brought against an insurance carrier when a driver is the victim of a hit-and-run accident, or when the at-fault motorist is shown to have no insurance coverage.

$125,000. Cook County, Illinois. Trucking Accident. Settlement was obtained before trial for a woman who suffered injuries as a result of a trucking accident that occurred in the northbound lanes of I-294 in northern Cook County. A delivery truck operating in the adjacent lane, experienced a sudden blow-out of its front tire, launching debris toward the woman’s car. The woman lost control and drove off the highway after her vehicle was suddenly struck by tire debris. Records from the trucking company proved that the company had not been making adequate inspections or performing sufficient maintenance on the truck’s tires and brakes and that the driver of the truck failed to confirm the safe condition of his rig before operating it over the road.

Get Advice From an Experienced Attorney

It is important to speak with a knowledgeable attorney right away. An experienced attorney will be able to issue required notices, obtain witness statements if needed or ensure that evidence is collected and preserved. If a settlement is reached, an attorney can provide valuable assistance in seeking an adjudication or reduction of costly medical or insurance liens. Don’t battle with or even speak to the other driver’s insurance company without first consulting with an attorney.