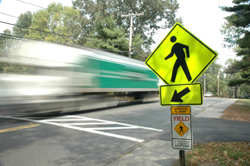 Hit and run accidents reveal a lack of humanity in others. In Illinois, a person who flees the scene of an accident involving an injured person has committed a serious crime, punishable by imprisonment.

Accidents involving pedestrians and cyclists (bicycle accidents) often result in devastating injuries, and sometimes fatalities. If you have been injured in a car accident, or have been struck as a pedestrian or a cyclist, and the at-fault motorist left the scene of the accident, you may have an important legal claim as an “uninsured motorist,” which can be brought against your own insurance carrier.

Will County, Illinois. Truck accident, uninsured motorist, hit and run. A settlement for $100,000 (policy limits) was reached by attorney John J. Malm in an uninsured motorist claim (UM) on behalf of a man who was suffered serious shoulder injuries when a semi-tractor trailer struck his vehicle and fled the scene. A lawsuit was initially filed against a trucking company based on the man's description that identified the truck; however, the lawsuit was later voluntarily dismissed because GPS data obtained by law enforcement could not confirm the location of the truck at the time of the accident. An uninsured motorist claim was brought against the man's automobile insurance, and a policy limits settlement was reached before arbitration.

Why Should you be Represented by Counsel?

An experienced and knowledgeable attorney can be particularly valuable in confronting and resolving hospital, physician, and subrogation “liens” which arise from paid and unpaid medical expenses alike. This process must be completed before the overall settlement is finalized. I am often able to provide my clients with valuable assistance in resolving or adjudicating expensive liens that were filed against their claim (and actually compete against the client’s net settlement), which result in substantial savings to the client in determining the net settlement amount they will receive. Remember, each dollar reduced or eliminated from a competing lien translates to a dollar earned by my client. For example, when a lien is reduced by $10,000, it results in a $10,000 additional net recovery to my client, and so on. Do not overlook this important fact when you consider whether to hire an attorney, or whom you hire. Get a lawyer who gets results.