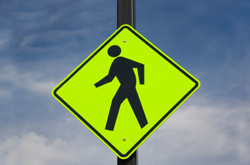 Each year, there are over 5,000 motor vehicle accidents involving injuries to pedestrians in Illinois. Tragically, some of these accidents result in fatalities to innocent pedestrians, including children.

$100,000. Kane County, Illinois. Pedestrian Accident. Settlement totaling $100,000 was reached in underinsured motorist claim on behalf of a client who was struck by an automobile as he crossed a city street in Aurora, Illinois. The young man was walking within the cross walk and had nearly reached the other side of the street when he was struck by a car traveling at a high rate of speed, according to witness testimony. The man suffered a comminuted fracture of the tibia and fibula, which required surgery. He underwent a right leg 4 compartment fasciotomy with open reduction and internal fixation (ORIF) of the right tibia. The man has suffered permanent muscle and nerve damage to his leg and foot. A previous policy limits settlement was reached with the at-fault motorist’s insurance company for $20,000.

Why Should You Be Represented by Counsel?

An experienced and knowledgeable attorney can be particularly valuable in confronting and resolving hospital, physician, and subrogation “liens” which arise from paid and unpaid medical expenses alike. This process must be completed before the overall settlement is finalized. I am often able to provide my clients with valuable assistance in resolving or adjudicating expensive liens that were filed against their claim (and actually compete against the client’s net settlement), which result in substantial savings to the client in determining the net settlement amount they will receive. Remember, each dollar reduced or eliminated from a competing lien translates to a dollar earned by my client. For example, when a lien is reduced by $10,000, it results in a $10,000 additional net recovery to my client, and so on. Do not overlook this important fact when you consider whether to hire an attorney, or whom you hire. Get a lawyer who gets results.

The Law Offices of John J. Malm was recently retained to represent the family of an injured 9-year-old girl, who was struck by a hit-and-run motorist while crossing the street at a park near the family’s home in Hanover Park, Illinois. Police are seeking the identity of the driver of the fleeing vehicle, believed to be operating a pick up truck. The young girl suffered severe injuries as a result of the accident, including a closed head injury. The family has retained attorney John J. Malm to pursue a claim for damages by bringing an uninsured motorist claim against the family’s automobile insurer.