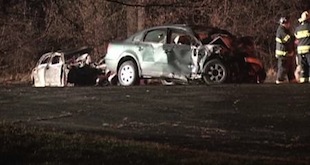 Montoya Medina's blood alcohol level was 0.16 — twice the legal limit — when he struck a car being driven by Antonio Alvarez, 37, of Warrenville in West Chicago. Alvarez was attempting to turn onto Illinois Route 59 from Garys Mill Road when his vehicle was struck by Montoya Medina's vehicle, which was northbound on Route 59, according to authorities.

Both vehicles were engulfed in flames, according to police, and Alvarez was pronounced dead at the scene.

(The full text of the article was printed at http://www.chicagotribune.com/suburbs/wheaton/ct-west-chicago-crash-met-1209-20141208-story.html).