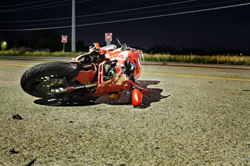 Each year, over 3,000 motorcycle crashes occur in Illinois. Motorcycle accident fatalities account for 14.3% of all traffic fatalities on Illinois roads and highways. If you have been injured in a motorcycle accident, there are steps you should follow (See What To Do When You Have Been Involved in A Car Accident), and it is important that you consult with an attorney who is knowledgeable in handling such claims. See www.dot.state.il.us.

Motorcycle accident case settled in Cook County, Illinois. A settlement for $222,500 was reached by Illinois motorcycle accident lawyer John J. Malm recently for a client was involved in a motorcycle accident in suburban Cook County, Illinois. The Naperville, Illinois man suffered serious injuries after being thrown almost 40 feet from his motorcycle as a result of the collision at an intersection on Route 38 in Proviso Township, Illinois. The driver of the car that struck the man was cited for making an illegal left turn. The left-turning car appeared suddenly in front of the motorcycle, causing an impact that injured the motorcyclist, who was obeying all traffic laws at the time of the accident. A lawsuit was brought on behalf of the motorist. Police investigators confirmed that the driver of the car failed to obey his signal and failed yield to the motorcycle, as often occurs at Illinois and Chicago area intersections.

Motorcycle/scooter accident settled in Kane County, Illinois. A settlement for policy limits of $100,000 was reached by Illinois motorcycle accident attorney John Malm recently on behalf Batavia, Illinois woman who suffered a spinal fracture and other serious injuries when her motor scooter, a Vespa, was rear-ended by a car in Geneva, Illinois. Evidence obtained in an investigation of the scooter accident showed that the young woman was struck from the rear by the operator of an SUV, who was not paying attention. Driver distraction is a leading cause of motorcycle accidents in Illinois. The injured scooter operator was obeying all traffic laws at the time of the accident, when she was struck from behind.