Illinois dog bite attorneys, John J. Malm and Jason P. Schneider, have won a $500,000 settlement for a client who suffered injuries as a result of a violent pit bull attack at her home in Chicago Heights, Illinois. The woman, whose family had agreed to temporarily watch a friend’s pit bull in her home, was suddenly attacked when the animal became startled by a vacuum cleaner. The dog bit the woman about the hand and arm, refusing to let go. The woman dragged the animal out the front door while still being attacked. It was not until a neighbor heard the woman’s screams and rendered aid that the aggressive pit bull terrier was pulled off of the woman, freeing her. By that time, the dog had bitten on her abdomen and forearm multiple times. The pit bull attack lasted several terrifying minutes. 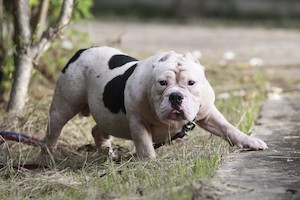 “Injuries from pit bull attacks are more severe, requiring more surgical interventions -- up to five times more -- than injuries from any other dog breed. In Naperville and the Chicago area, we are seeing more and more people being attacked and injured by this dangerous breed.” – John J. Malm, Naperville Attorney.

The injured woman was taken to an emergency room and treated for severe wounds to her arm and body. Due to the severe damage caused by the deep puncture and laceration wounds, the woman experienced permanent injuries to her hands and arms. She underwent several surgeries to repair nerves that had been injured in the attack and to regain function in her hand.

Mr. Malm and Mr. Schneider took steps to hold the owner of the vicious animal, and his insurance carrier, liable for failing to disclose that the animal had previously attacked another individual, and was likely considered a “vicious animal,” capable of attacking anyone for any reason, without justification.

Mr. Malm and Mr. Schneider worked to build a legal case for negligence against the owner of the animal. “This was a dangerous pit bull,” Mr. Malm said. “We obtained information concerning the dog’s history, including information regarding a prior attack,” Mr. Malm explained. “We photographed the woman’s wounds and showed the extent of her injuries, including the resulting scarring. The medical records indicated that her injuries to her hand would be permanent.”

Mr. Malm and Mr. Schneider presented evidence of a negligence claim, alleging that the animal’s owner knew of the dog’s vicious propensities, but still allowed the woman to take the dog into her home. The dog’s owner, Mr. Malm and Mr. Schneider alleged, was responsible for “carelessly allowing the dangerous animal to be taken into the woman’s home without advising her of the animal’s history and the likely risk that another attack would occur.”

Mr. Malm and Mr. Schneider negotiated a successful settlement on behalf of their client with the homeowner’s liability insurance carrier, avoiding lengthy litigation and trial.

The violent attack of the woman was investigated by local animal control officials and the police department. The dog, which had previously bitten others, was put down as a result of the attack.

For additional information on dog bite lawsuits in Illinois, including, pit bull attacks, or to learn about our law firm’s most recent dog bite settlements, visit our dog bite information page here.

If you have suffered an injury as a result of a vicious dog bite or pit bull attack, contact the experienced and knowledgeable dog bite lawyers at John J. Malm & Associates. Our dog bite lawyers have successfully handled dog bite lawsuits in Cook County, DuPage County, Will County, Kane County, and elsewhere throughout Illinois. We are a team of experienced Naperville personal injury lawyers who represent individuals and families who have suffered an injury or loss due to an accident. You may be entitled to a substantial settlement if you have been injured. Call 630-527-4177, or 312-422-6855, and speak with Attorney John J. Malm and his team today.